Almost all lakes and streams in Central Oregon contain Rainbow Trout. The Deschutes River is world famous for it's trout fishing. It begins in the Cascade Mountains Southwest of Bend. It is the source of water for Crane Prairie Reservoir and Wickiup Reservoir. It runs through the middle of Bend and eventually flows into the mighty Columbia River.

Crane Prairie Reservoir is known for its large trout ("Cranebows"). It is about a one hour drive from Bend. It was flooded in 1928 with most of the timber left standing. It is a relatively shallow lake with the deepest sections about 15-20 feet deep near the channels in the spring. The water level drops steadily all summer during the irrigation season.

The Cranebows spawn in the upper Deschutes in early spring and then return to the reservoir and are scattered around the shallower water. As the water warms in early summer the fish start congregating around the channels. Twenty to thirty inch rainbows are common.

All methods of lake fishing work on this strong fighting fish. Fly fishing is very popular once the fish move into the channels. Trolling flies, spoons or spinners is a popular method early in the season. Early summer brings on weed growth which makes it difficult to troll without fowling your lure. 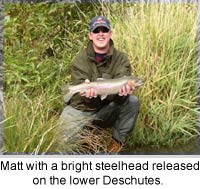 There are numerous campgrounds and one resort on Crane Prairie. The resort provides rental boats, licenses and anything you might need for trout fishing. The owners are always helpful in pointing new anglers to where the fish are biting the best. It is difficult to fish here without a boat.

The Deschutes flows out of Crane Prairie and a few short miles into Wickiup Reservoir. Wickiup has large Rainbow and German Brown Trout as well as a large population of Kokanee Salmon. The Kokanee and Browns are the primary targeted fish.

Early spring brings out the die hard Brown Trout fisherman. They concentrate near the dam and generally troll Rapalas or similar minnow type lures. Ten pound fish are common in the early spring. Since Brown trout are nocturnal you'll find the serious fisherman on the water at first light. Wickiup is best fished by boat but some large browns are caught from shore along the dam in the spring.

During the summer the Kokanee start congregating along the river channel. Jigging, bait fishing or trolling are the preferred methods for catching the Wickiup Kokanee. The Kokanee spawn in the fall with the Browns following them up the Deschutes channel.
Early morning and late evening is the best time to target the large Browns.

Wickiup only has one improved boat ramp which is located at Gull Point. There is not a boat dock so it makes it somewhat difficult for launching and boarding your boat. There are a couple of improved camp grounds as well as many unimproved places to camp.

The Deschutes River continues below Wickiup dam and flows through Bend. This section contains some smaller Rainbows and some nice sized German Browns. It runs through the Deschutes National forest. There is a good drift from the dam down to the Pringle Falls area.

The section of river that runs through Bend does not produce many fish as it is not stocked with hatchery fish and receives substantial fishing pressure.

Lake Billy Chinook is known for its native Bull Trout population. Bull Trout are close to extinction in many parts of Oregon but not in Lake Billy Chinook. The state record Bull Trout was caught here in 1989. It weighed 23 pounds and 2 ounces. Ten to fifteen pound fish are still common with several being caught every year.

The best time to catch a large Bull Trout is in March and April. The Metolius arm of the reservoir boarders the Warm Springs Indian reservation and is closed from the end of October to March 1st every year. Early in the season the larger trout come into the shallows (10-20 feet) to feed on the abundant Kokanee salmon.

If you find the Kokanee you will find the Bull Trout. A boat is necessary to catch these fish. They are caught by casting the shore line with silver minnow plugs, trolling plugs, fly fishing with a sink tip line or jigging the deeper water if the fish have not moved up into the shallows yet.

If you are interested in pursuing Bull Trout check the authors' web site for more helpful information, links and pictures.

The trout fishing in this article is all located within a one hour drive from Bend. There are many other lakes, reservoirs and streams within an hour of Bend that are not mentioned in this article.

Bend Oregon is a great place to live if you like the outdoors. There are many good trout fishing spots close by. The lower Deschutes below Bend is world famous for its Salmon Fly hatch but that is the subject of another article.

Bend Oregon is better known for its trout fishing but it also supports a few lakes that have good populations of Largemouth and Smallmouth Bass. The bodies of water within a one hour drive from Bend that hold bass are Crane Prairie Reservoir, Wickiup Reservoir, Davis Lake, Prineville Reservoir, Haystack Reservoir and Lake Billy Chinook (Round Butte Reservoir).

Crane Prairie Reservoir is better known for its large Rainbow and Brook Trout. However it is full of stumps, standing and downed trees. It is a Largemouth Bass heaven. It is a relatively shallow body of water with reeds and lily pads as well as lots of wood cover.
The deepest part near the dam is 16 to 20 feet deep depending on how much water is in the reservoir at any given time.

The reservoir sits in the Cascade Mountains southwest of Bend. It is surrounded by pine trees and supports a healthy wild life population. You can always count on seeing countless Ospreys, a few Bald Eagles and numerous water fowl. Osprey and Great Blue Herons both nest at Crane Prairie.

Crane Prairie is not a year round lake and it often freezes over in the winter. Since it is a trout lake the Oregon Department of Fish and Wildlife closes it to fishing at the end of October and opens it back up on the third Saturday in April. There are years where it is partially ice covered on opening day.

The belief is that Largemouth Bass no not bite until June or July," when the water warms." However, some of the best bass fishing on Crane is in May. The author has caught many bass over five pounds in late April and May. The place to fish is the shallow North side of the reservoir where the water temperatures can be in the low to mid fifties in 2 to 6 feet of water.

Early mornings in April and May are not the time to fish for bass. Early afternoon is the best time to start. The water in Crane is crystal clear this time of year and it is hard to get a bite if the sun is out and the wind is calm. The silt and mud bottom with plentiful amounts of wood cover soak up the heat on these cool spring days.

If it is calm and sunny you are better off to put your rod down, your trolling motor on high and start looking for fish. Often times they will be laying on top of fallen logs sunning. There are also many root balls from blown over trees that will hold fish. You will not see any small fish this time of year. It will be strictly pre-spawn females.

Once you start seeing fish slow down and start looking more closely. You will find several fish in the same area and do not want to spook them too much. Once you have found a few areas that hold fish be sure and mark them so you can come back when the wind picks up and puts a little chop on the water.

It is not necessary to mark every fish. Just keep track of the general area where you saw concentrations of fish. Go back to those areas and fish the lay down logs and the root balls. Black weedless jigs with a trailer or 6 inch black worms are the ticket this time of year. The author's favorite jig trailer is a 5 inch black with blue flake twin tail grub.

Crane Prairie bass are big for Oregon standards. The largest bass caught by the author was 6.5 pounds. He has seen Largemouth caught and released in excess of 8 pounds in some local bass tournaments. These are not your normal run and gun bass tournaments however because there is a 10 mile an hour speed limit on Crane Prairie Reservoir.

In the early 1990s the average spring time bass was in the 3 to 5 pound range. Now the average is 2 to 4 pounds with a few 5 pounders thrown in. Crane Prairie Largemouth usually spawn around the full moon in late June. Spawn and post spawn is usually when the fish "start to bite" for the general public and anyone can catch several small males that bite aggressively.

After the spawn the large female bass drop back to deeper water around the channels and become harder to catch. Crank baits and spinner baits come into play at this time of year. The water also starts to take on some color and is not as clear. Aquatic weeds and moss also start to grow making it more difficult to fish jigs and worms.

Fall and late fall are a difficult time to catch fish as the water is low from irrigation use and it starts to clear up again. Spring is definitely the best time to catch Large Mouth Bass on Crane Prairie Reservoir.