Since radon is a by-product of disintegrating rock, it is more likely to be present in rocky areas or where subterranean rock formations are known to exist, especially granite. 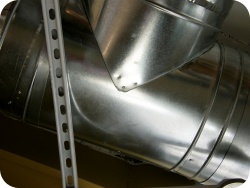 During a natural geologic process, rock becomes fractured and small amounts of radon are emitted. Because radon is a gas that contains a heavier molecule than oxygen, it will settle out of the air to the lowest levels of a structure when no ventilation is present to stir and move.

When radon mitigation is considered, all of the potential radon sources and entry paths into the structure are studied, along with the potential for introducing ventilation or adding additional ventilation in the areas with elevated radon levels.

Water can also be a source of radon gas. Municipal water supply systems are usually not a source of radon. But when the water supply for the house is a ground well through rock, or in bedrock that is releasing radon, it is possible for radon to become trapped in the water and released when the water becomes vapor, such as with a hot shower, laundry, or other steam producing uses for the water. Radon levels are known to increase as much as 200 times beyond the action level because of released radioactivity from a shower.

Measuring Radon Levels in a House

Radon is measured in picocuries per liter (pCi/L), which is a measurement of the radiation contained in a liter of air.

There is no current agreement among health professionals as to an acceptable or safe level of radon exposure. In the outdoors, radon levels average 0.4 pCi/L. The EPA has a suggested "action level" of 4.0 pCi/L. The following are the EPA recommendations for various radon measurement levels in a structure: