The Biology of Fungi

Mold and Fungi can be found in Bend Oregon homes.  It can be found almost everywhere, both indoors and out, molds and fungi are simple organisms. Micro fungi are only visible through a microscope. Plaster and wood-rotting fungi are known as macro fungi because they produce sporing bodies that are visible to the naked eye. Molds and mildews are names given to thousands of species of filamentous fungi.

Molds have clusters of spores that are located on the end of tiny stalks. Spores are the reproductive products of the mature mold. The web-like body called mycelium attaches to porous surfaces. Mycelia and spores may contain chemical compounds, some of which can be poisonous and toxic to humans, and they can create a large range of health problems, depending on the exposure and tolerance of the individual. Spores pose a larger health concern because they become airborne and can be inhaled.

Most molds and fungi do not cause humans any health problems. Found on plants, foods, dry leaves, and other organic material, molds perform a valuable function by assisting in breaking down dead material. Mold spores are very tiny and lightweight, allowing them to travel freely through the air. Other types of mold colonize as a network of filaments by attaching themselves to host material.

Molds that have a food source and adequate moisture will grow in an indoor environment, even in arid climates. Evidence of mold can be seen in the form of discoloration ranging from white-to-orange and from green-to-brown-to-black growing on various materials found inside and outside the house. 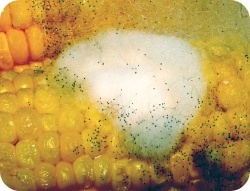 Mold needs food and moisture sources to grow. The most common indoor food sources for molds are: