Drinking Water in Your Bend Home

No water is naturally pure. In nature, all water contains some impurities. As water flows in streams, sits in lakes, and filters through layers of soil and rock in the ground, it dissolves and absorbs the substances it touches. Some of these substances are harmless, but even naturally occurring minerals are considered contaminates at certain levels, as the water may be unpalatable or even unsafe.

The majority of substances that are absorbed into water from natural rock or soil conditions are harmless. However, once humans have introduced contaminants into the soil or streams from factories, farmlands, or even by people in their homes or yards, the water supplies may be contaminated with any number of chemicals or toxic substances.

The federal Safe Drinking Water Act of 1974 is the primary federal law protecting drinking water supplied by public water systems (those servicing more than 25 people). Under the law, the U. S. Environmental Protection Agency (EPA) is the federal agency responsible for setting national standards for drinking water. The national standards established by the EPA are required to be enforced by the states. The drinking water standards are intended to address drinking water at two levels. The first level relates to public health. The regulations in this area relate to the maximum contaminant level for more than 80 contaminants that may occur in drinking water that pose a risk to human health. When it is economically or technologically not feasible to lower a maximum contaminant level relating to a specific contaminant, then prescribed treatment techniques are required to prevent adverse health affects of the contaminant on humans. The second level of regulations relates to taste, odor, and appearance of the drinking water.

In 1996, President Clinton signed the Safe Drinking Water Act Amendment of 1996 (SDWA). Among other things, as of 1999, SDWA requires that all public water systems must prepare and distribute annual reports to its customers. These reports inform the customer as to the source of system's drinking water, results of monitoring the water supply system during the prior year, and information on health concerns associated with violations that occurred during the year. In addition, a water supplier must promptly inform the consumer if the water supply has become contaminated by something that can cause immediate illness. In its notification process, it must provide information about:

SDWA also has many new provisions that help states and water supply systems to improve the quality of drinking water by preventing problems before they occur. It has become clear that the best way to protect the nation's water supply is to protect the water at its source. For example, the act requires that each state develop a program to identify contamination threats and determine the resulting susceptibility of the drinking water sources such as watersheds, ground water, or reservoirs to activities that may harm the source water. Once the contamination source is identified, the state must then develop a program to address that contamination source and its prevention from entering the water supply. 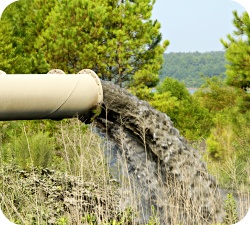